If you’ve been keeping up with tech news you’re aware that the much-awaited Samsung Note 8 with the signature S Pen stylus and dual cameras has been revealed. As expected, the Note 8 comes with numerous improvements and includes unique and innovative features such as live messages, live focus, IP68 rating, and of course the S Pen.

It’s well-known that Samsung uses the Note series for not only improving and enhancing existing features but also to launch new ones, and the situation is no different with the Note 8. It features a number of innovations that redefine the way one uses smartphones. Below is an entire list!

Earlier this year, the Infinity Display was introduced to the public with the Galaxy and the Galaxy S8+. Both phones looked incredible, primarily because of the highly immersive display. The features include a 6.3-inch curved super AMOLED display that has a resolution of 2960 x 1440 pixels and looks absolutely stunning from all angles.

Moreover, the 18.5:9 aspect ratio runs edge to edge and allows the users to have a more immersive experience while watching their favorite show or playing games. The Infinity Display greatly enhances the multitasking features and entertainment capabilities. Plus, the mobile HDR premium certification allows consumers to see the content the way filmmakers envisioned.

On the back, the Note 8 features two 12MP cameras. Both of them feature OIS — Optical Image Stabilization. According to Samsung, this is the first time that a dual camera has featured optimal image stabilization on both sensors.

Furthermore, the camera also comes with Phase Detection Autofocus and impressive Dual Pixel technology. Meanwhile, the live focus feature allows users to shoot portrait photos with a unique Bokeh effect. Samsung claims that the offered Bokeh effect can be adjusted both before and after the shot has been taken.

Another innovative new feature in the Note 8 is app pairing. With this, you have the chance of fully utilizing the massive 6.3-inch display. While the multi-window feature is quite impressive, app pairing makes it even better. You can pair up two apps and then launch them together either in App Edge or from the home screen with just a single tap! Both the apps open up in split-screen mode and allow you to work even quicker.

This means that you’ll get more talk time if you buy a Samsung Galaxy Note 8 from T-Mobile. Why T-Mobile? According to OpenSignal’s recent report, T-Mobile is the fastest network available. So, that’s more talk time on a highly reliable network. 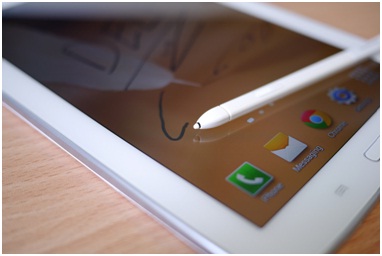 The S Pen continues being the core of the Note series. With the S Pen accompanying the Note 8 you can create memos, lists, quick reminders, and more, right on the lock screen. Hovering the S Pen over any text on your phone will allow you to translate it. The S Pen has become more sensitive, changing the experience to grow closer to how you use an actual pen to write on paper.

With the Galaxy Note 8 and its redesigned S Pen, a new feature called Live Messages has been introduced. In simple terms, this is a GIF maker. With the S Pen, once you draw a sketch, the Note 8 makes an animated GIF. Then, you can either save it to your device or send it to people.

All in all, the Note 8 is an amalgamation of some of the most incredible innovations that Samsung has come up with. The dazzling 6.3-inch display, app pairing, dual cameras with live focus, and bezel-free design only prove one thing — the Note 8 not only innovates in hardware but in software, too. The Samsung Note 8 strikes an excellent balance between productivity, improvisation, and innovation.