Do you need to use an NTFS formatted external hard drive, USB flash drive, or SD card on both Mac and PC? Are you looking for the best NTFS for Mac software in 2020? If you do, then this post is the exact material that you would be interested in. Before we discuss the best NTFS for Mac software thoroughly, we’d like to introduce a little bit of the background for users who don’t know the issues between NTFS and macOS.

At this point, a useful NTFS for Mac app is really important because there is no native NTFS write support from Mac OS X 10.3 on, and NTFS formatted drive is read-only in macOS. Lately, the newest macOS Catalina 10.15 was published but there is no NTFS write support still. So, for users who frequently transfer files between a Mac and PC with an NTFS drive, a reliable NTFS driver for Mac like iBoysoft NTFS for Mac would really make their life easier. Now, let’s check out some key features of iBoysoft NTFS for Mac which is one of the best NTFS drivers for Mac in 2020, and how we can take advantage of these features to manage our NTFS drives on Mac.

As we know, many manufacturers of external hard drives and USB flash drives would initially format the storage devices to NTFS file system. However, users are not aware of that and save their important files directly to such drives. Everything is fine until the NTFS drive is connected to a Mac: documents on this drive become read-only and write-protected, files are unmovable, and photos and videos are locked even we have the ownership. Why? That’s because NTFS is a proprietary file system of Windows and is read-only for macOS. Under this circumstance, we can’t directly reformat this drive to a compatible file system as it will cause data loss if we don’t have any backup.

To get write access to NTFS on Mac, we can download and install iBoysoft NTFS for Mac on our computers. After plugging in an NTFS formatted drive to a Mac, the NTFS drive will be automatically mounted in read-write mode once this software is launched. Then, we will be able to write to the photos, videos, documents, videos, and other files on this drive seamlessly, including edit, deletion, copy, paste, rename, etc.

For some users who have always been using Mac but swift Windows recently, NTFS file system may be a better choice for Windows computer because it is the default file system of the Windows OS disk. Or for some geeks, some advanced features of NTFS like encryption and large file support would be more attractive to use. However, they open Disk Utility on the Mac and try to reformat this drive to NTFS, only to find that there is no NTFS option available at all.

Now, with the assistance of iBoysoft NTFS for Mac, we can reformat our external hard drives or USB flash drives to NTFS file system if we want to. Whether the original file system of this drive is exFAT, FAT32, or HFS+, we can easily erase this drive to NTFS after making a copy of a data backup. To do this, we need to open the menu tab of iBoysoft NTFS for Mac at the upper right corner of our desktop, click on the Disk Management option, then select the drive we want to erase, and then click on Erase to NTFS.

Other features of iBoysoft NTFS for Mac

Except for mounting NTFS drive in read-write mode and erasing other file systems to NTFS on Mac, iBoysoft also has some other useful functions deserved to mention. 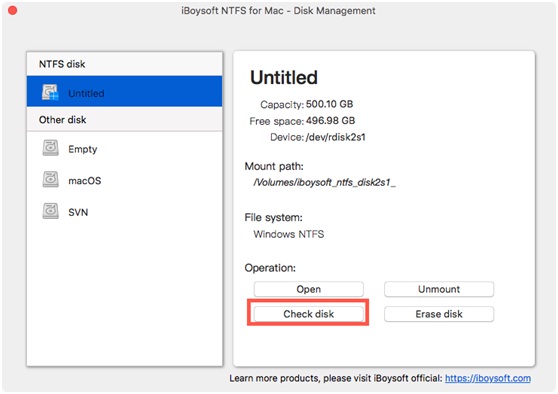 For example, we can use this software to check and repair disk errors when an NTFS drive is corrupted, unmountable, or not readable on a Mac computer. To use this feature, we can simply click on the Disk Management option in the menu, select the drive we want to repair, and finally choose Check disk to restore this disk to working condition.

What’s more, it’s possible that we need to clear up a volume for free space, or we have backed up the important files on this disk but now need to erase the disk for privacy. However, deleting all the files on this partition one by one is either too cumbersome or not safe enough for us. Under these conditions, we can make the best use of the Erase disk feature of iBoysoft NTFS for Mac to wipe off the whole NTFS volume with ease.

With so many useful functions, iBoysoft NTFS for Mac could be the best NTFS for App in 2020 because it makes it so easy to manage and use our NTFS drives on Mac with full access.

Tip: This software offers a free trial for three times, so grab the opportunity and try it now.