We know that you come to our website looking for all the latest news, reviews, and opinions iPhones, Android phones, iOS, and Android software. That’s what we specialize in, and that’s what we’re proud to bring to you every day of the year. You might even have a fierce preference between the two competing types of phones. Everyone knows that iPhone users think they’re superior to Android users and vice versa, and most of the time, that debate makes for entertaining arguments on the internet!

Right now, though, there’s a single issue that unites users of both types of phones, and it’s the same issue that most of the world is facing at the moment. You should know all the basic ways of staying clear – wash your hands thoroughly before and after eating, meeting people, touching anything in public, or doing just about anything else. Don’t touch your face. Advise your elderly or vulnerable relatives and friends to stay indoors as much as possible, and think twice about going to large public gatherings. That’s all common sense – but far too few of us are thinking about our phones. 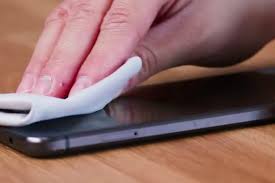 You probably won’t like to think about this, but the chances are that the surface of your phone is dirtier than your toilet seat. Think of all the things it gets exposed to during an average day, carried around in your pocket, and put down on dirty tables. Think about how many times you touch it with your fingers. This is probably especially worrying if you use your phone to play online sports game. Even when you’re on a good winning streak in a game like Enchanted prince, you’re still tense, and that means you’re likely to sweat. That sweat is full of bacteria and germs. You might pick up a big online win, but you might also unfortunately pick up something unpleasant from your phone in the process. That’s why it’s vital you keep it as clean as possible.

The good news here is that no matter what type of smartphone you have, they can all be cleaned the same way – and the only thing you need to exercise is good judgment and a little soap and water in most cases. Here’s how.

Keep Away From Alcohol

This isn’t drinking advice – it’s about staying away from any wet wipes that contain alcohol. Many cleaning wipes that you might use on your kitchen worktops – or even on your hands – contain rubbing alcohol. It’s great for cleaning, but it’s not so great for your phone. It can damage the display, and it can erode the hydrophobic coating of your device. As if that weren’t enough, it can also permanently disable the functionality of your ports, and we all know the pain of owning a phone with a headphone jack that no longer works.

Historically, mobile phone manufacturers have been wary of giving approval to use disinfectant wipes of any type of their phones, but in recent years Apple has said you’re fine to use Clorox Wipes. As the composition of handsets is so similar across the spectrum, that means you’re also fine to use Clorox Wipes (or something very similar) on whatever phone you own.

Stay Away From Paper Towels

This is a short, simple point. Paper towels are far too abrasive to be used to wipe your phone down. You’ll scratch the screen, and you might even scratch the cover. Even if they don’t scratch your phone, they’re infuriatingly prone to tearing or breaking up when they’re being rubbed on a screen’s surface, and those tiny pieces can go everywhere. They might clog up your ports, or they might get stuck to your screen and prove impossible to get rid of.

Power Your Phone Down

We shouldn’t need to say this at all, but you never know who might be reading. In case you were tempted to try to clean your phone while it’s switched on, don’t. Turn it off and leave it for thirty seconds before you even consider trying to wash it. Even if the waterproof seals are still intact, it’s a live electronic device, and you don’t want to take even the slightest chance of introducing that device to water while it’s up and running. Stay safe.

There’s a fine point between washing your phone and giving it a bath. Washing is fine. Baths are not. Your cloth should be damp, but it should never be wet. After you’ve applied water and soap or whatever cleaning solution you’ve decided to use to your cloth, wring it out and make sure it’s not dripping at all. If it’s dripping, those droplets can go anywhere – and by ‘anywhere’ we mean ‘inside your phone.’ That’s a one-way ticket to disabling a microphone or getting the inner workings of your phone wet. At that point, you better hope that you have valid phone insurance.

A gentle rub with a damp cloth and some gentle soap works wonders for your phone and its cover, but what about those annoying bits of lint, dust, and other tiny particles that get nestled into the corners of your phone, or trapped between the screen and the casing? They’re as likely to be carrying bacteria as anything else, and they’re hard to get out. That’s where Scotch tape becomes your friend. Put tape down across every groove and crease in your phone, and then slowly and gently pull it back off after it’s had a few seconds to stick to everything. All the unwanted debris should come right out with it. You could even carefully roll up a piece of tape and poke it into your ports to extract anything that may have become trapped in there. It’s like having a brand new phone again! If your ports are too small for this, gently poke around in them with a toothpick to see if you can ease the debris loose that way. Do not, under any circumstances, attempt to use a vacuum cleaner.

In the meantime, take every precaution you can – and that includes making the device you use more than anything else is cleaned every day!